Many users start playing with Cubelets without any instructions. They’re designed for that. But when you’re ready to get more intentional, explore the Getting Started Guide to learn the details behind building more with Cubelets robot blocks.

Download a free PDF guide to Cubelets to reference in your classroom, camp, or makerspace. 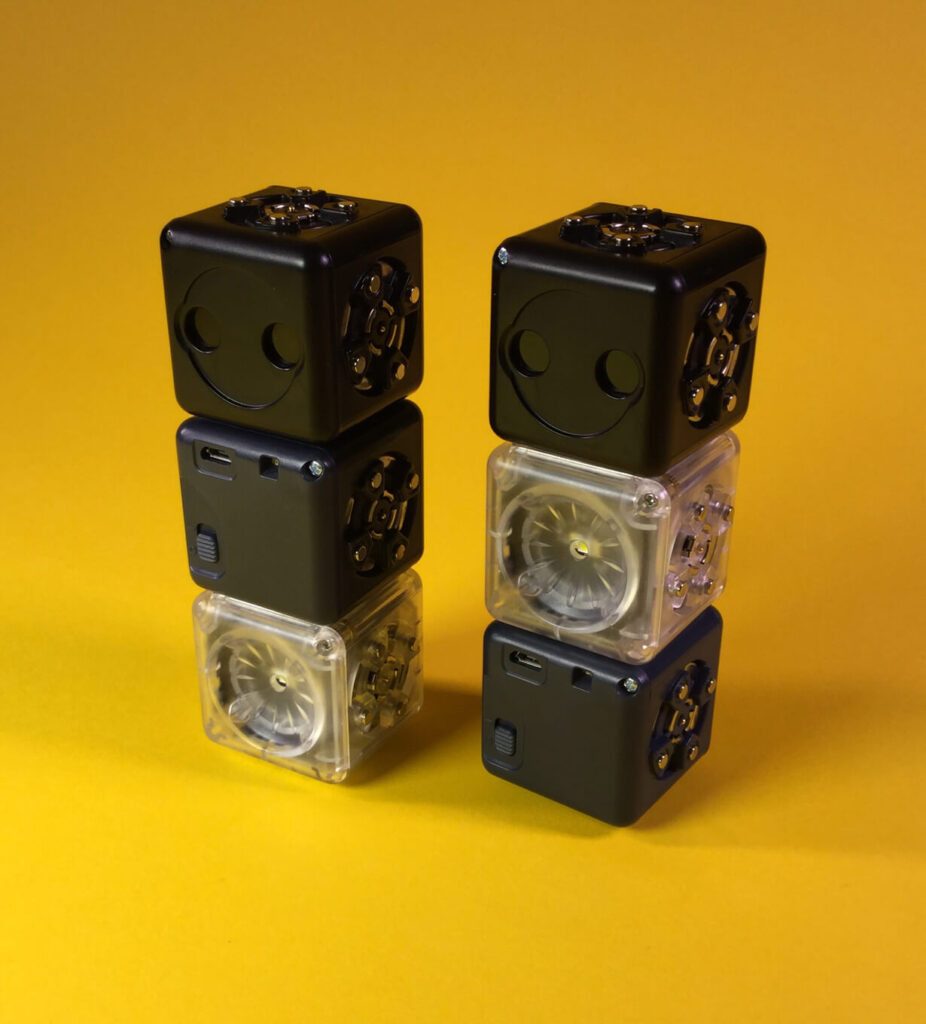 Cubelets come in three types: Sense blocks, Action blocks, and Think blocks. Sense blocks are black, Action blocks are clear, and Think blocks are different colors. Most Cubelets have five connection faces and one special face, which identifies the function of that Cubelet. Others have six connection faces and their function is indicated by their color. Every Cubelet has a small LED light in one corner. When the Cubelet is part of a robot and the robot’s Battery block is turned on, the LED light is on, too. The LED light shows that the Cubelet is getting power and talking to its neighbors. Each Cubelet robot must have one Battery block which powers all the other blocks in the robot. The Battery block has a small switch. When you slide it to the “O,” the Battery block is off. Slide to the line, “|,” and it is on. Turn it off to save battery life when you aren’t playing with your Cubelets. The Battery block has an internal, rechargeable battery. To recharge the Battery block, plug it into a micro-USB power source. Each connecting face of a Cubelet has three conductors. The outer ring and magnets conduct ground; the inner metal ring conducts power; and the center pin conducts data from one Cubelet to the next. These three conductors must connect with their neighboring counterparts in order for two Cubelets to communicate.

A robot is a machine that senses its surroundings and acts on its surroundings. Every robot needs a Sense block, an Action block, AND the Battery block. Sense blocks are black and Action blocks are clear. Every robot needs power. The blue-gray block is the Battery block. The Battery block has an on-off switch. Make sure it’s on before you start to play; turn it off when you’re done. To build a robot, you will need a gray block, a black block, and a clear block. Just snap them together and you’ve built a robot! 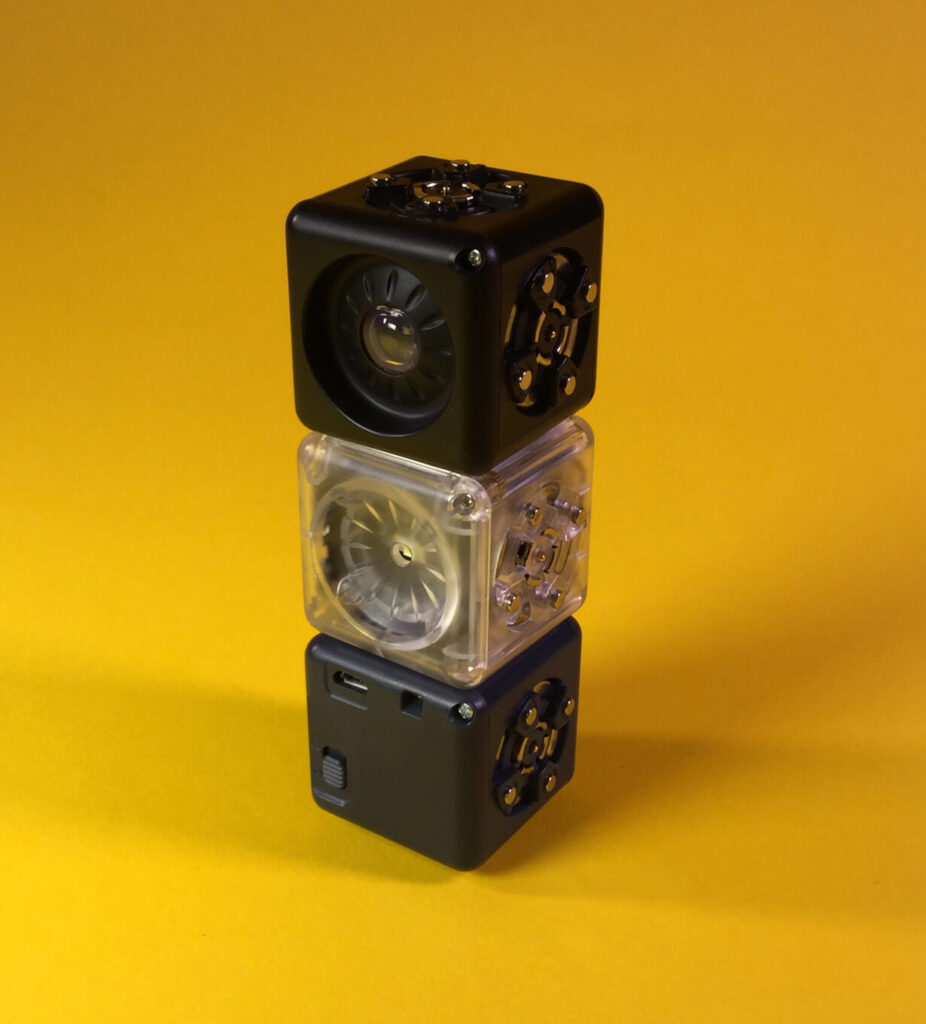 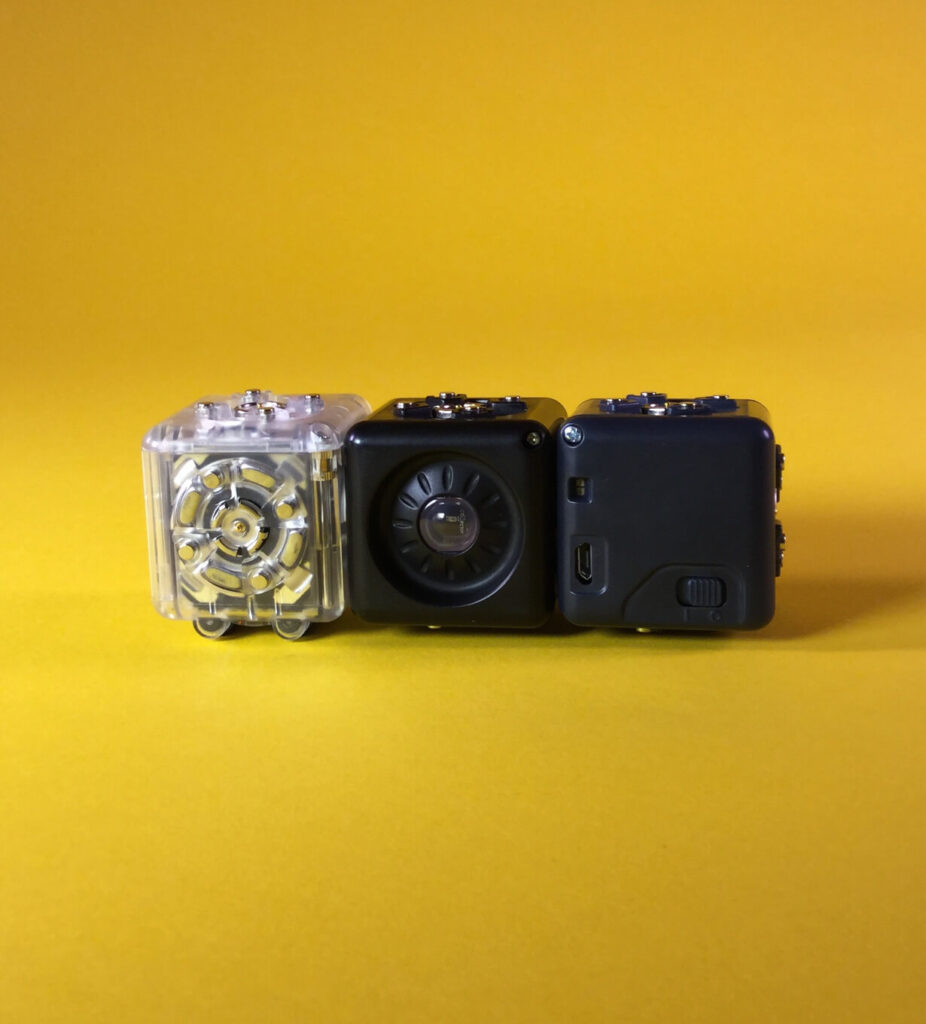 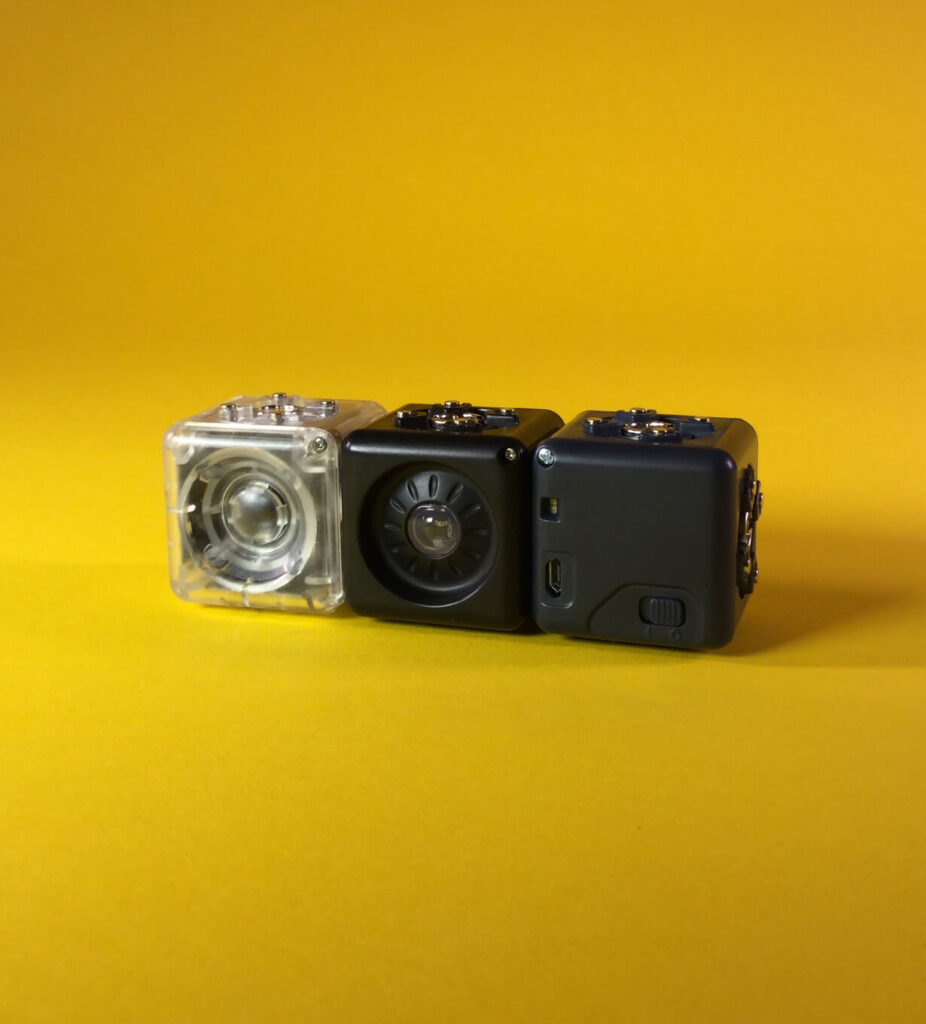 The arrow shows the flow of a number from the Brightness Sense block to the Flashlight Action block. 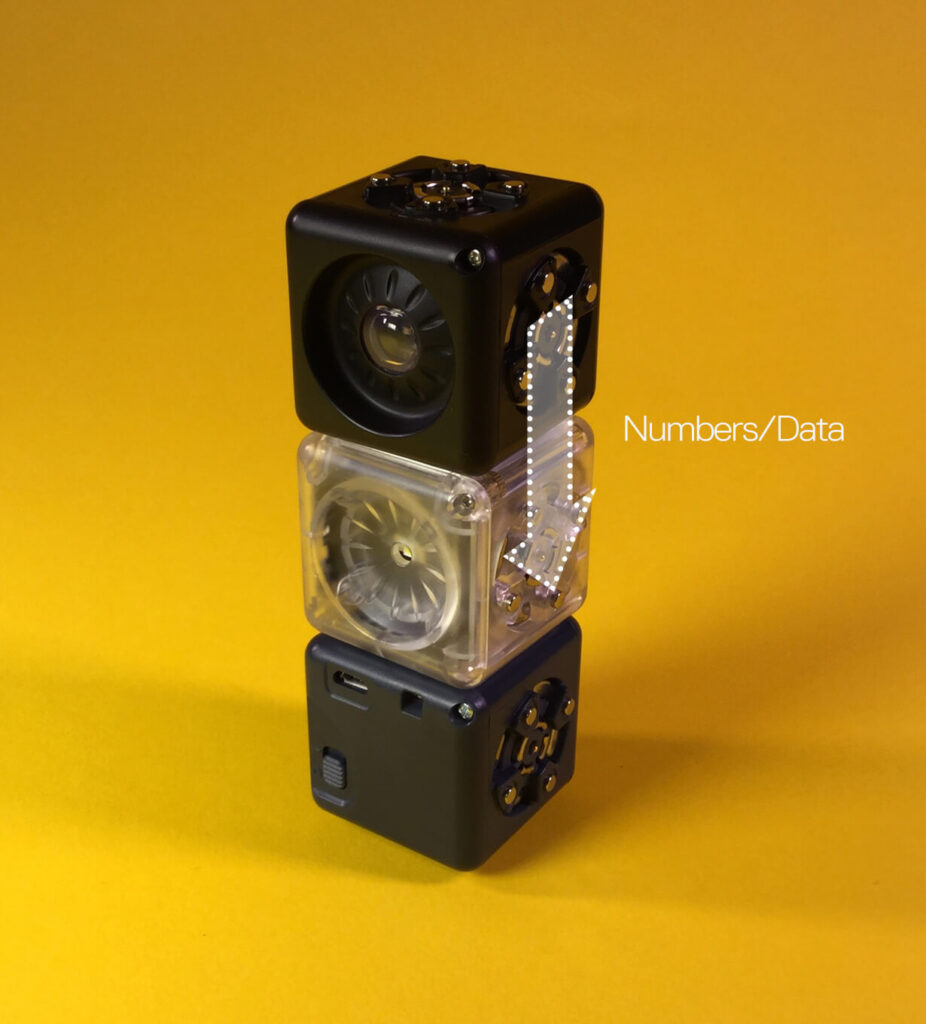 07
Using the Bar Graph Cubelet to see the numbers.

08
Arrangement of Cubelets makes a difference. 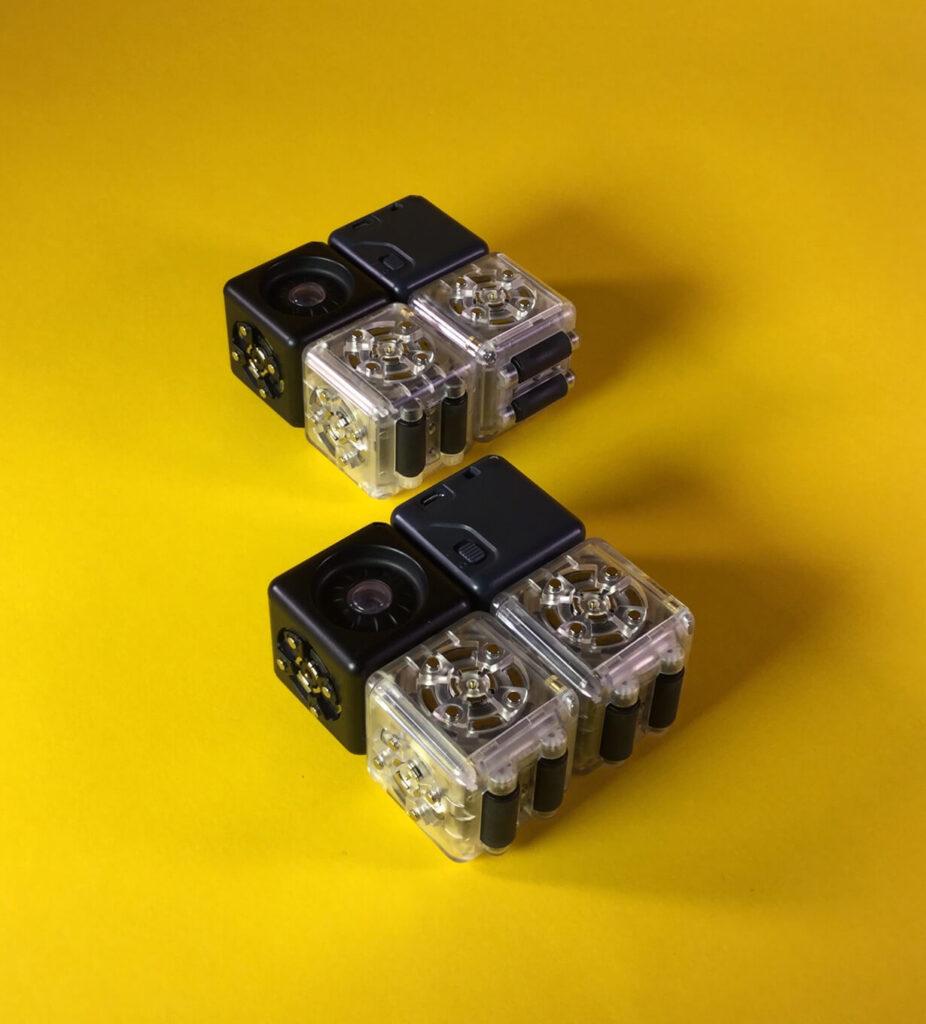 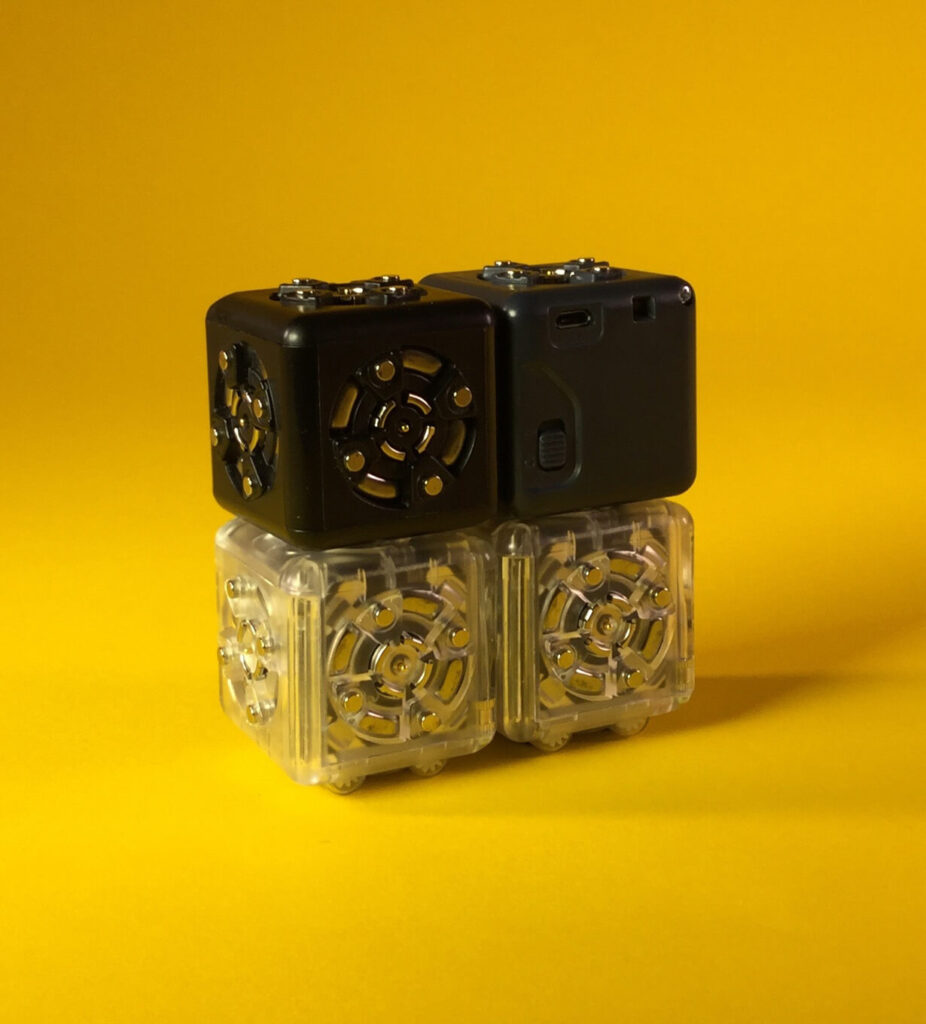 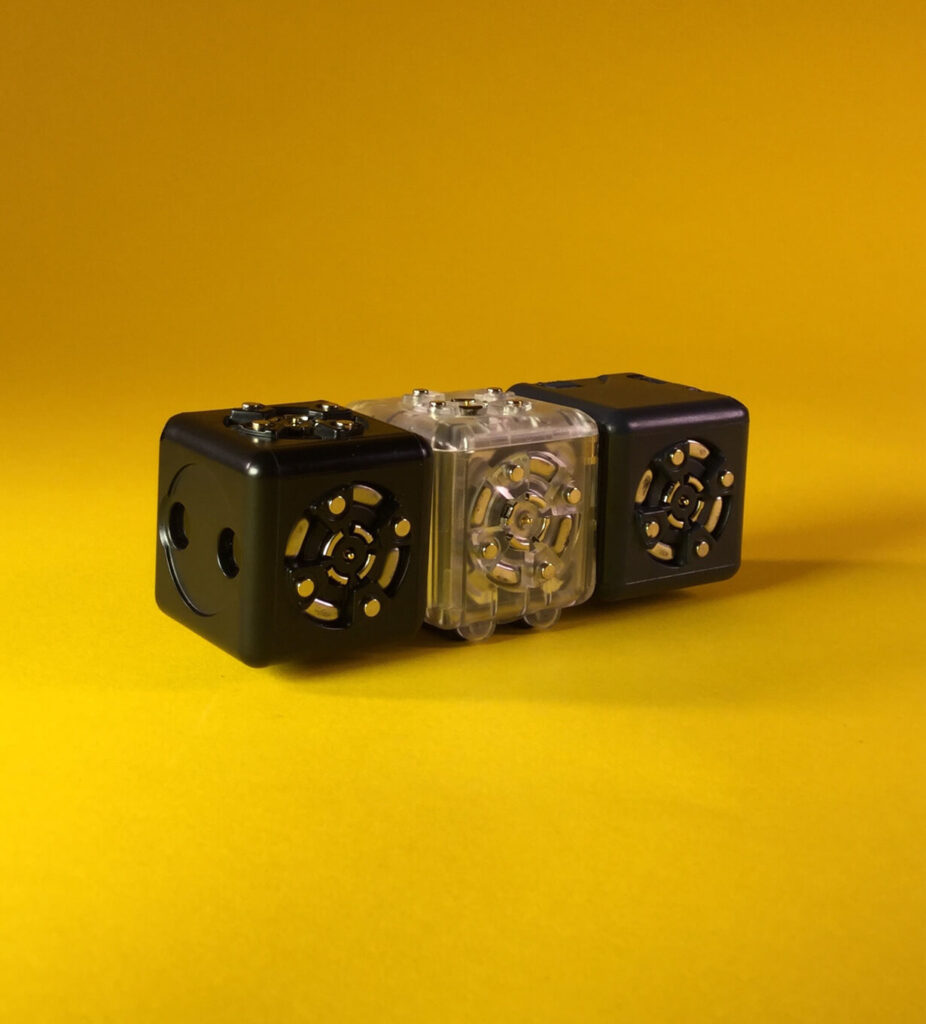 If you build this robot as a tower instead of a train, it still works, but it’s no longer stable: approach the Distance Sense block and the Drive Action block starts moving. Accelerate too quickly and the tower falls over. You can fix this: add a block at the bottom next to the Drive Action block. Any block will do, but try one of the green blocks, either a Passive block or a Blocker block. 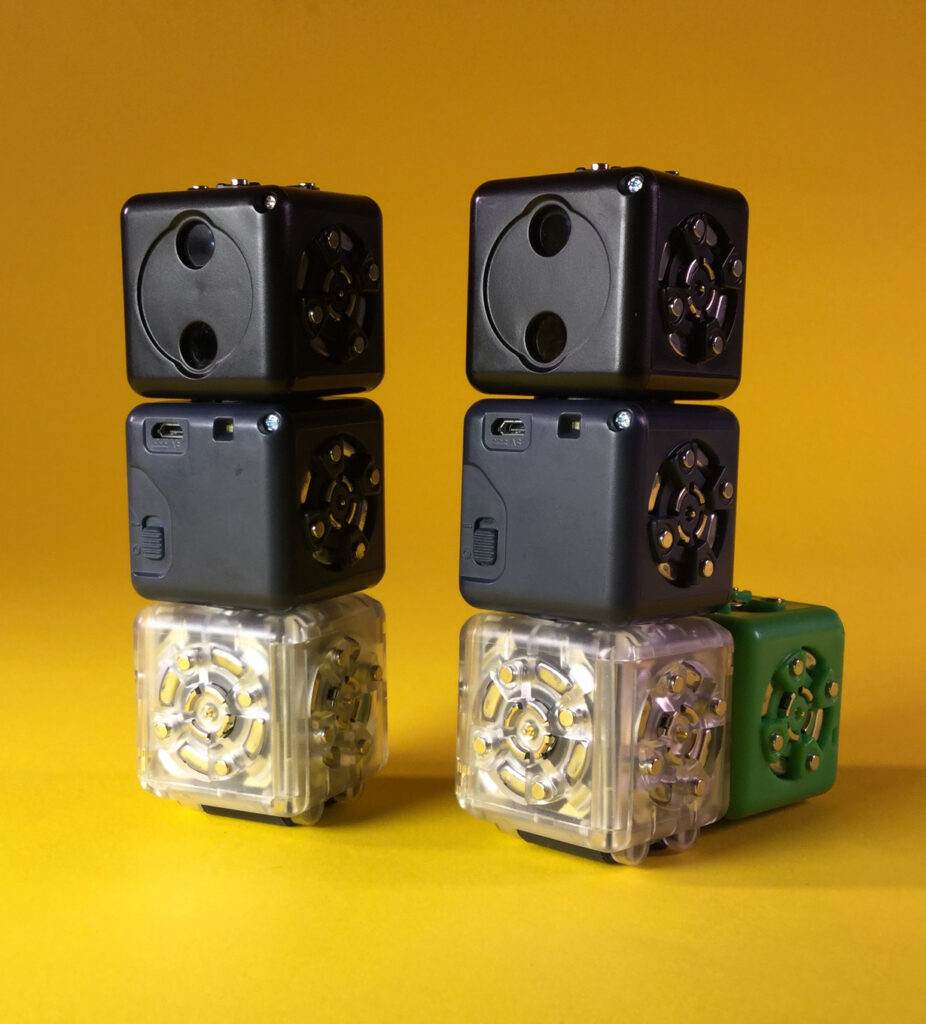 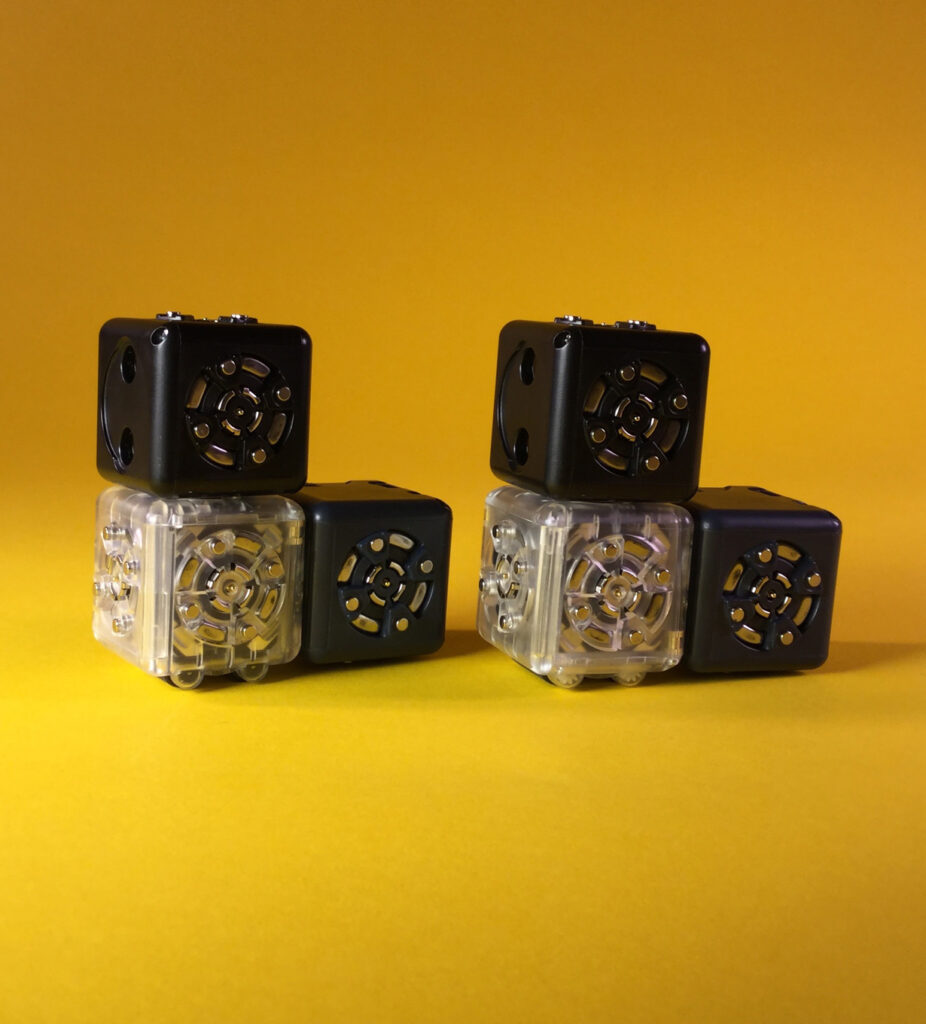 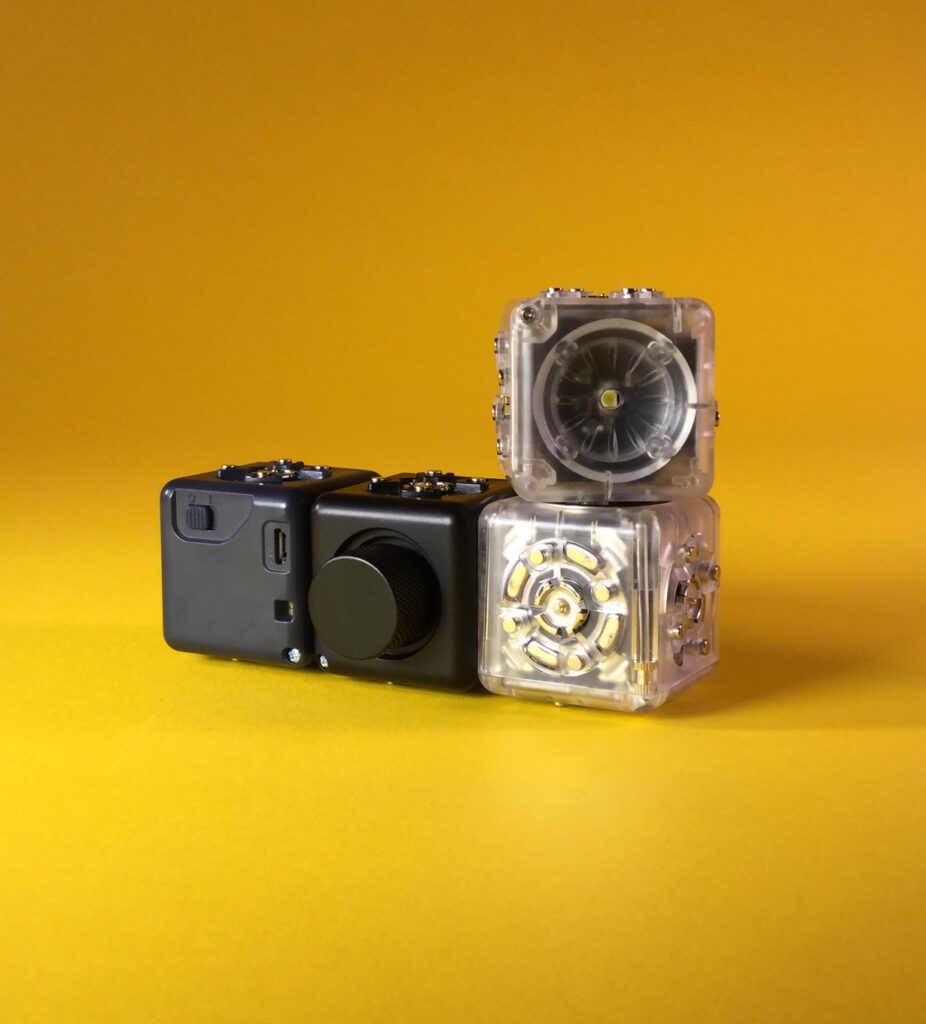 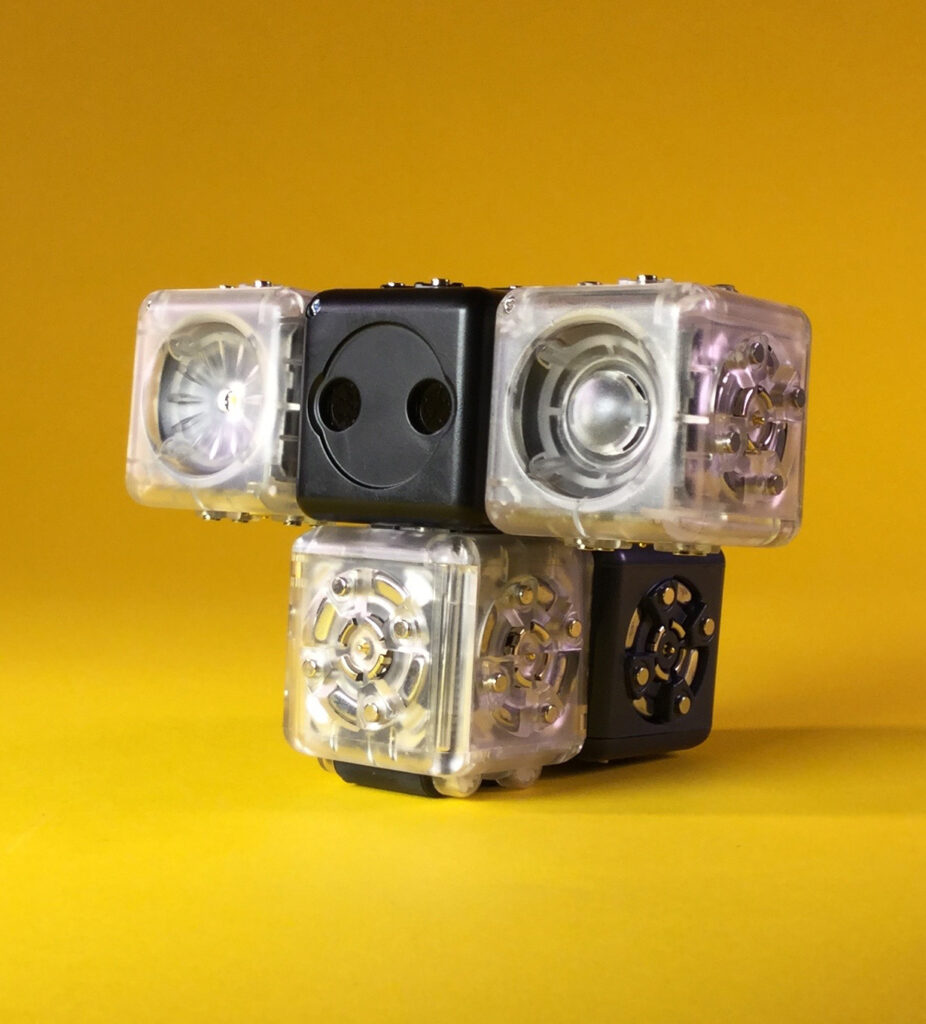 To make a Nightbot light up when it’s in a dark place, you need a Red Inverse block. Ooops! This robot as pictured is wrong. Can you figure out why? Let’s go back to the Light-sensitive Dimbot. It has a Brightness Sense block and a Flashlight Action block. (It also has a Battery block, of course, but we’re going to stop mentioning the Battery block because every robot has one.) The Dimbot made a silly flashlight. Its lamp is bright when it’s in a bright room, and dark when it’s in a dark room. We’d prefer a flashlight robot that turns on when it’s dark, and turns off when it’s light. That’s why we need the red Inverse Think block. 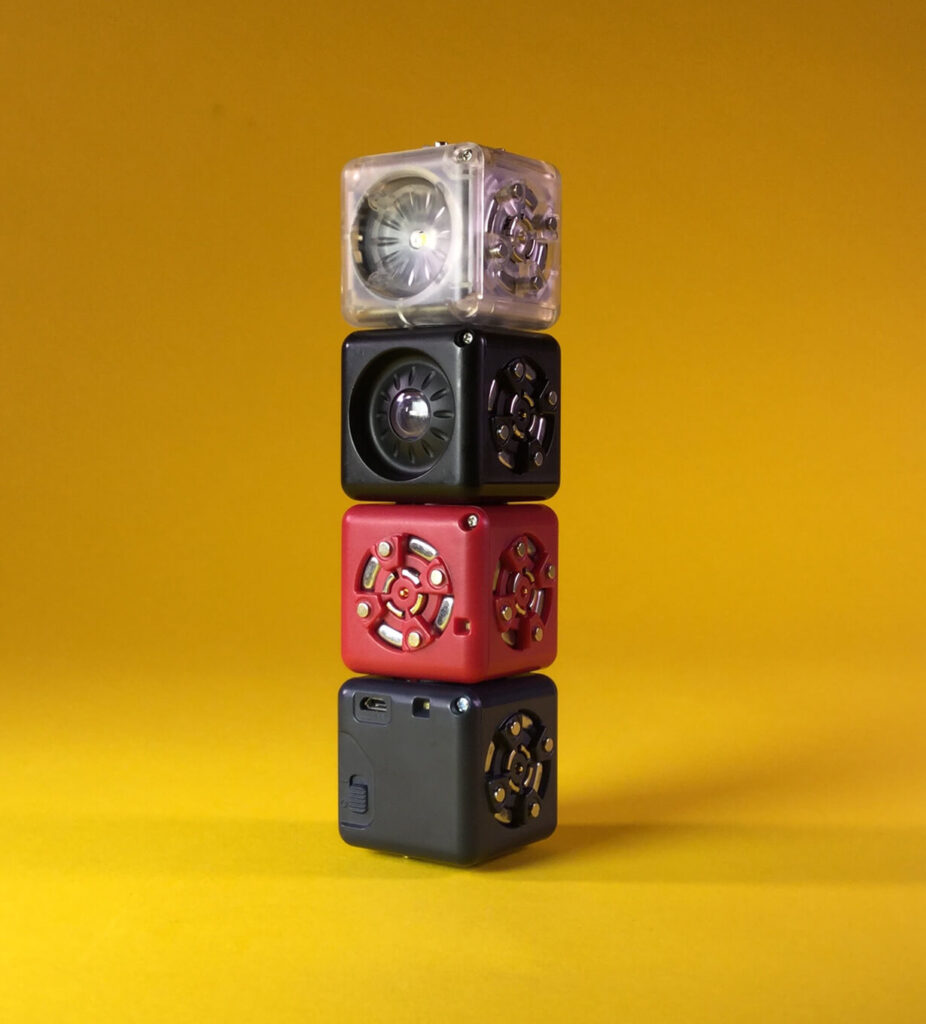 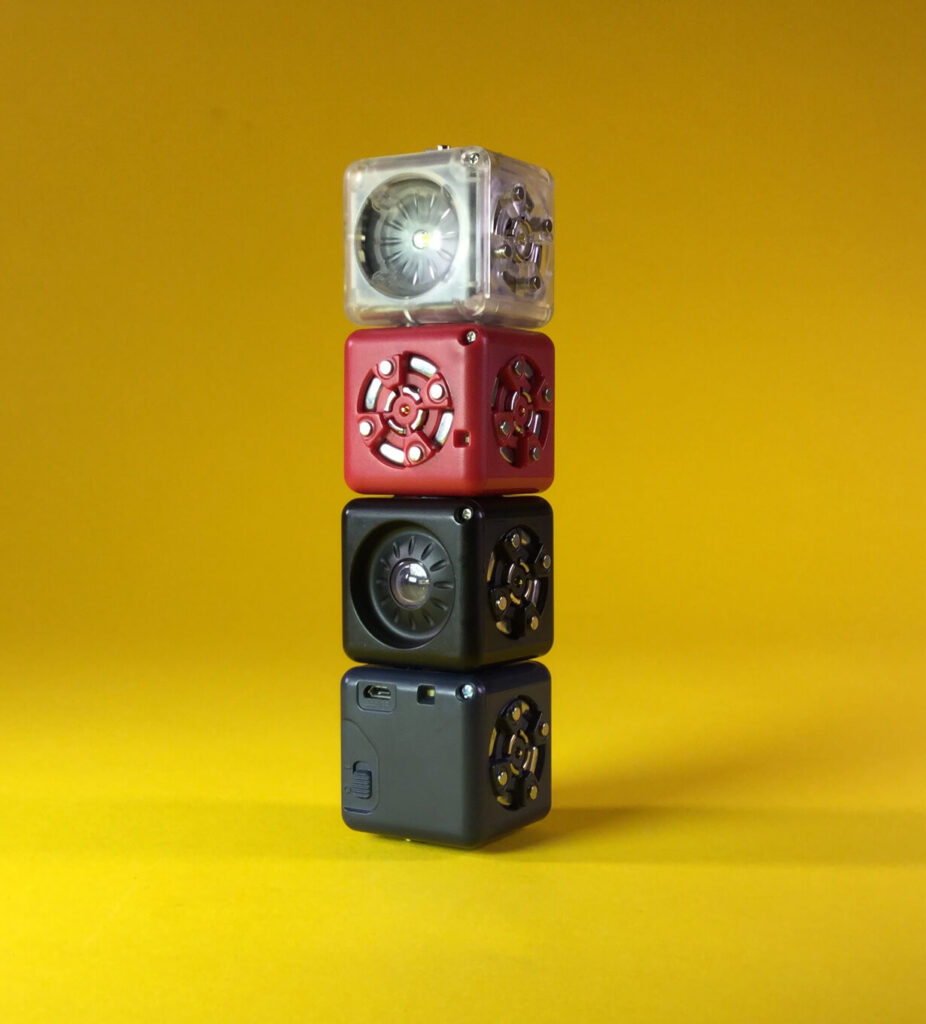 It also works the other way. When you put the robot in a dark room (or shade it with your hand) the Brightness Sense block produces a small number. The Inverse Think block turns it into a big number, and the Flashlight Action block makes its light bright: A Nightbot that turns on in a dark room, and turns off in a bright room. 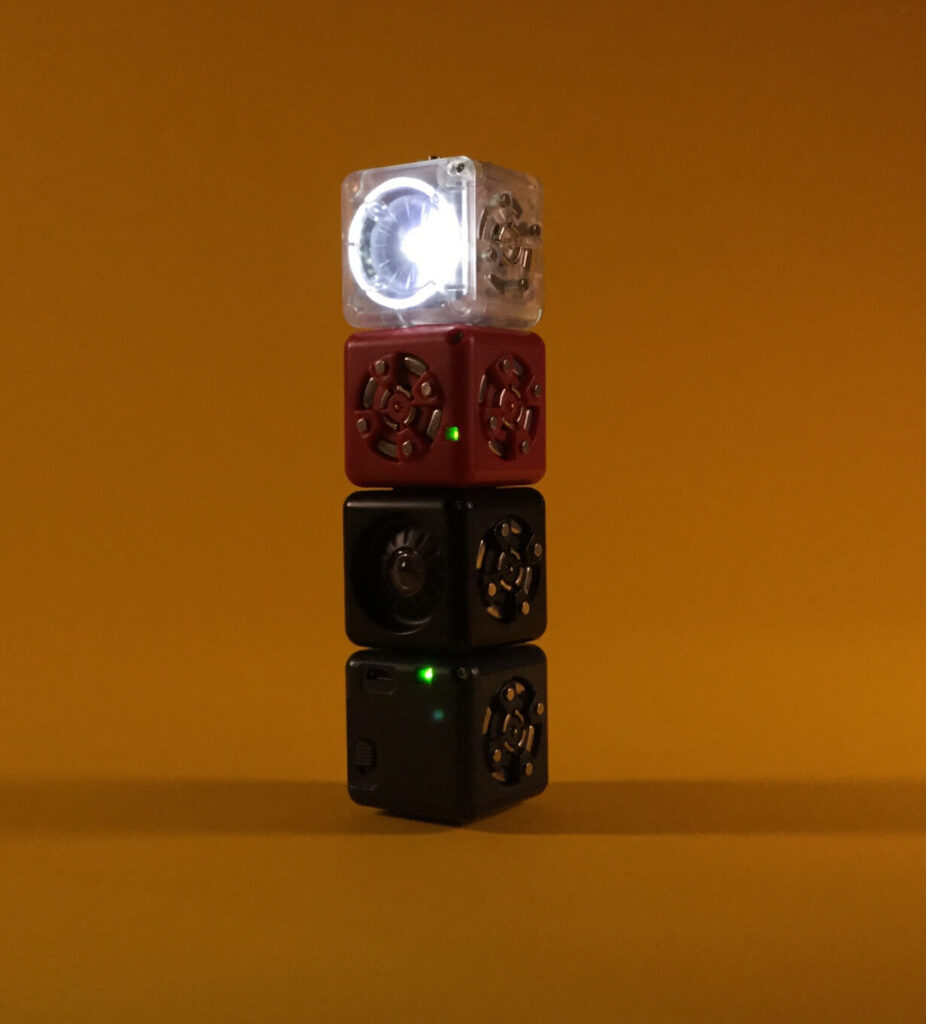 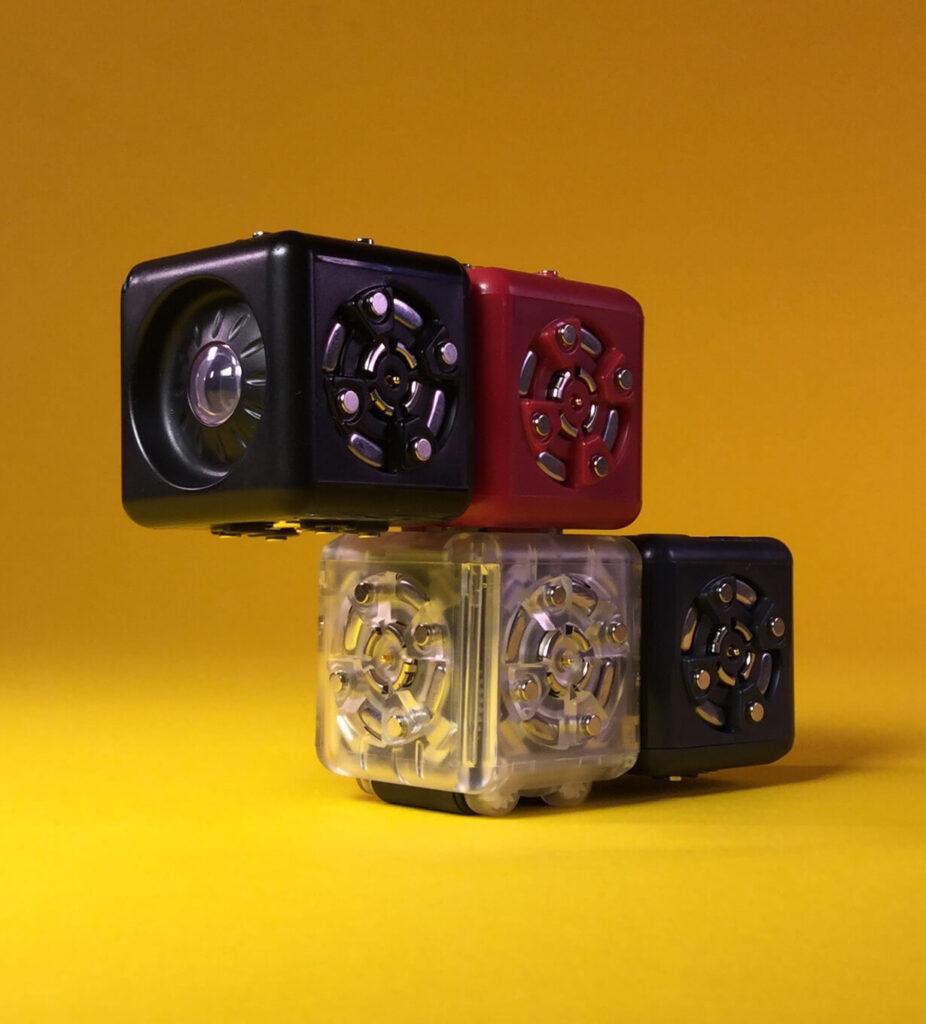 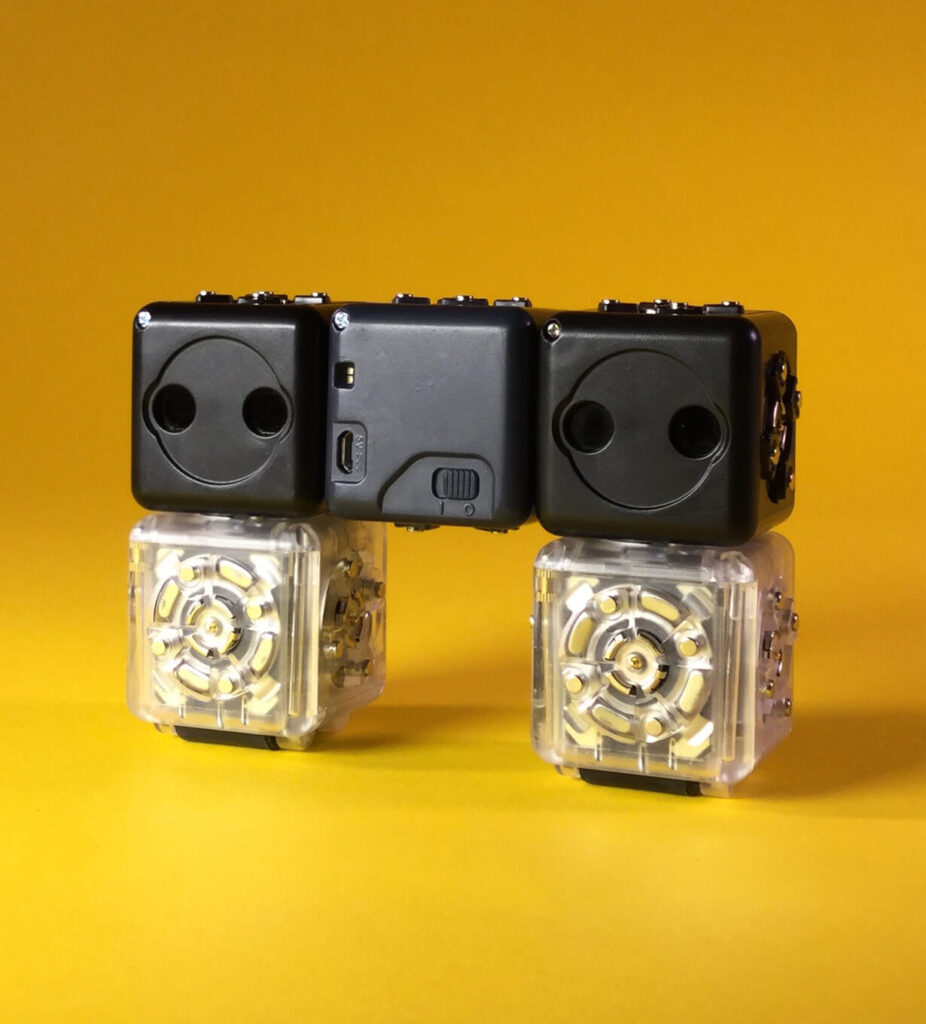 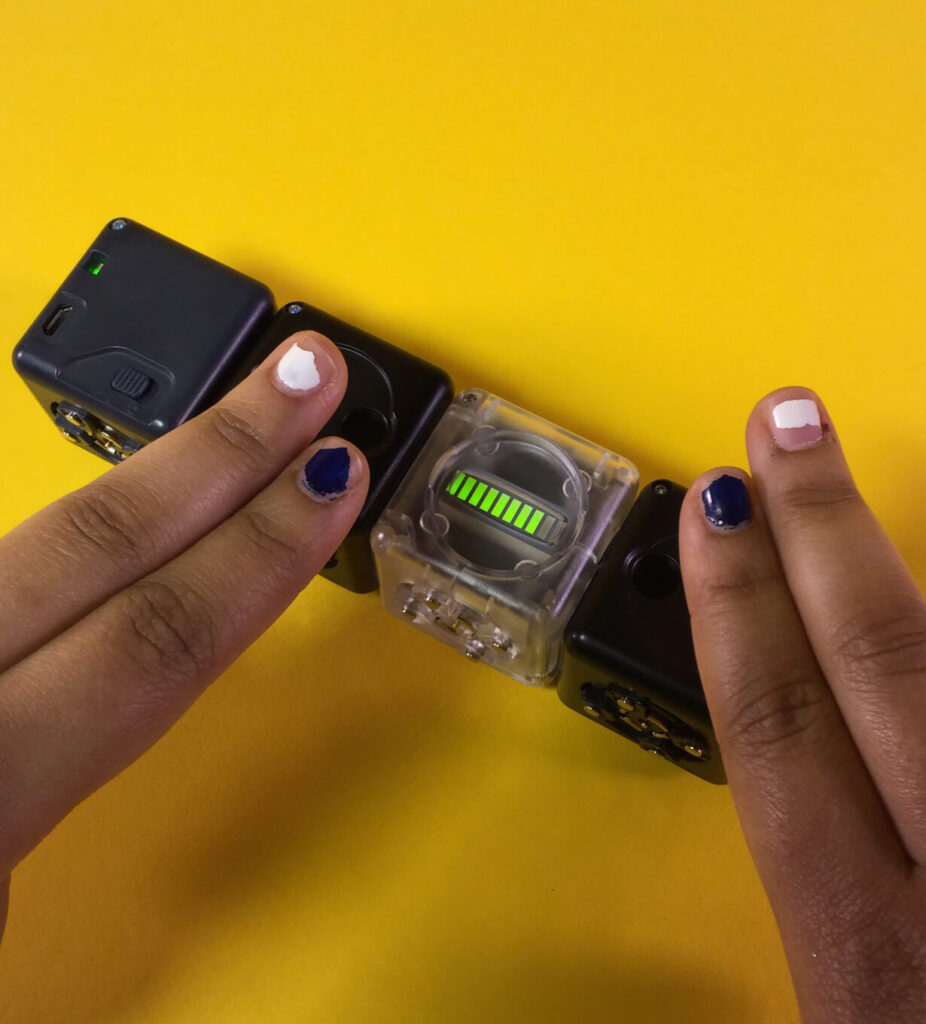 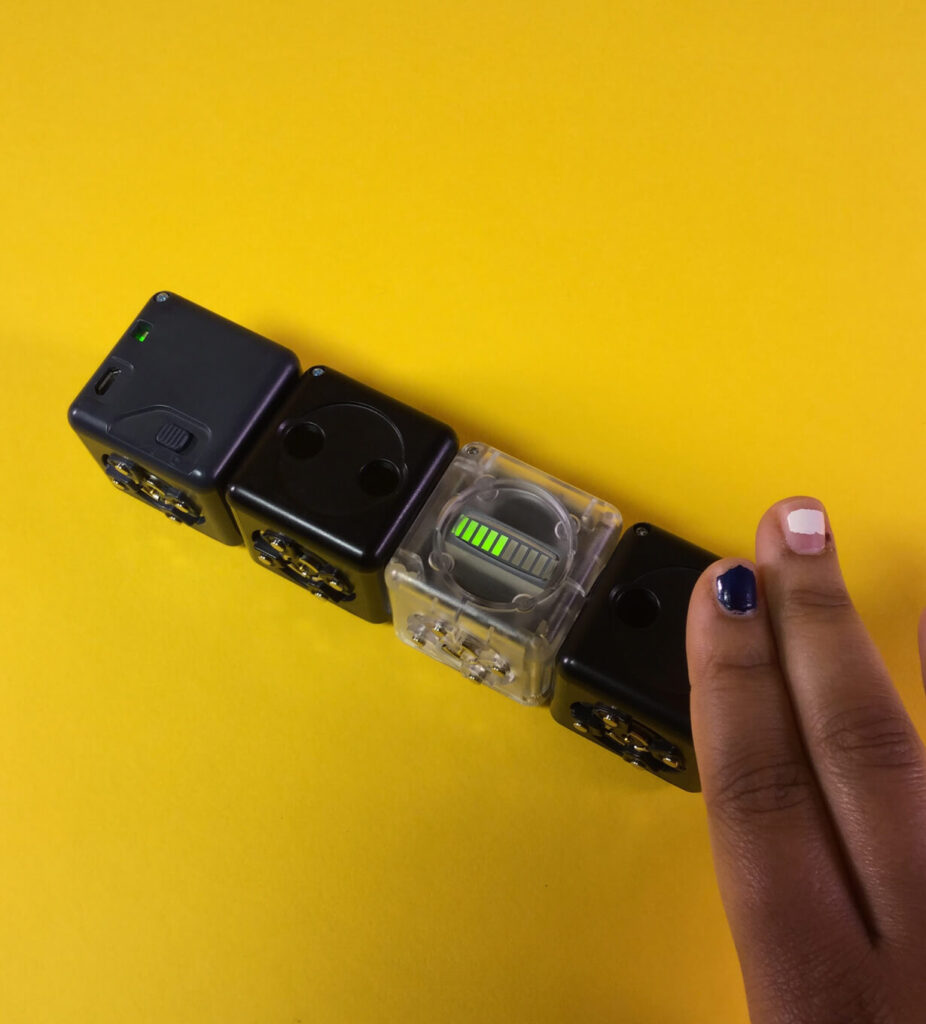 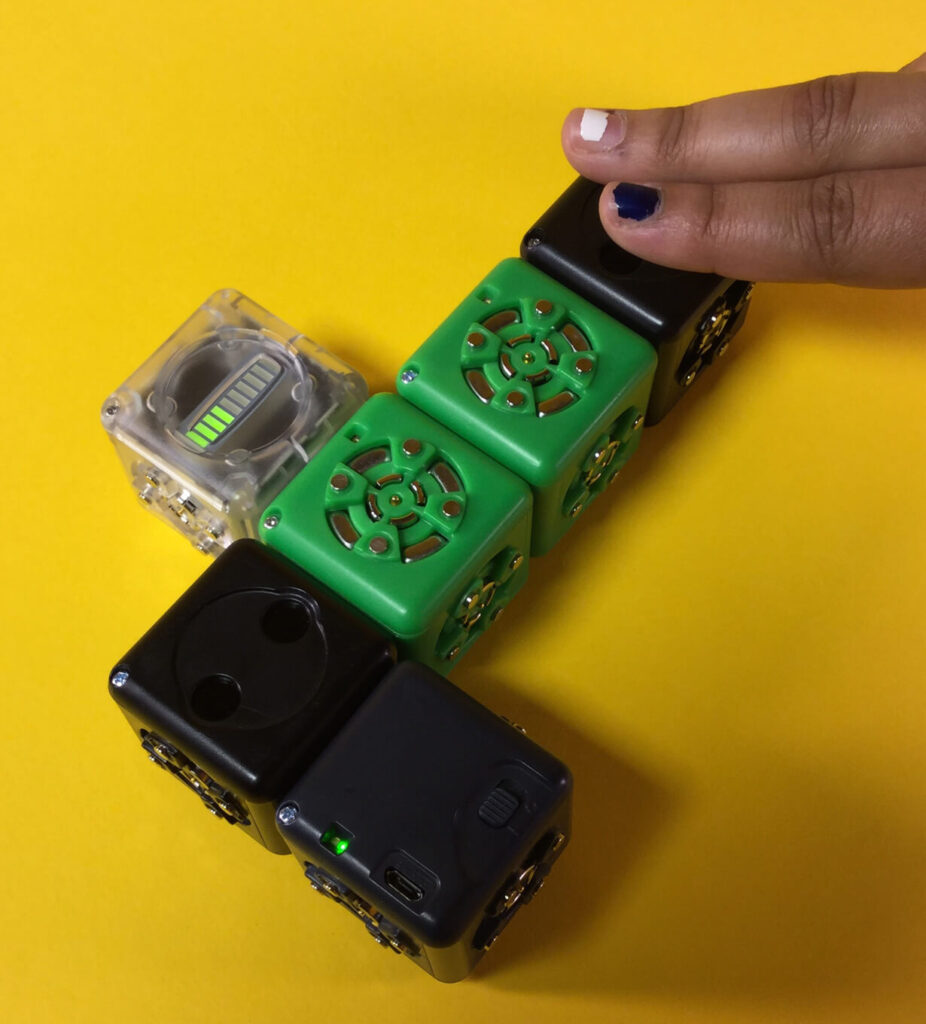 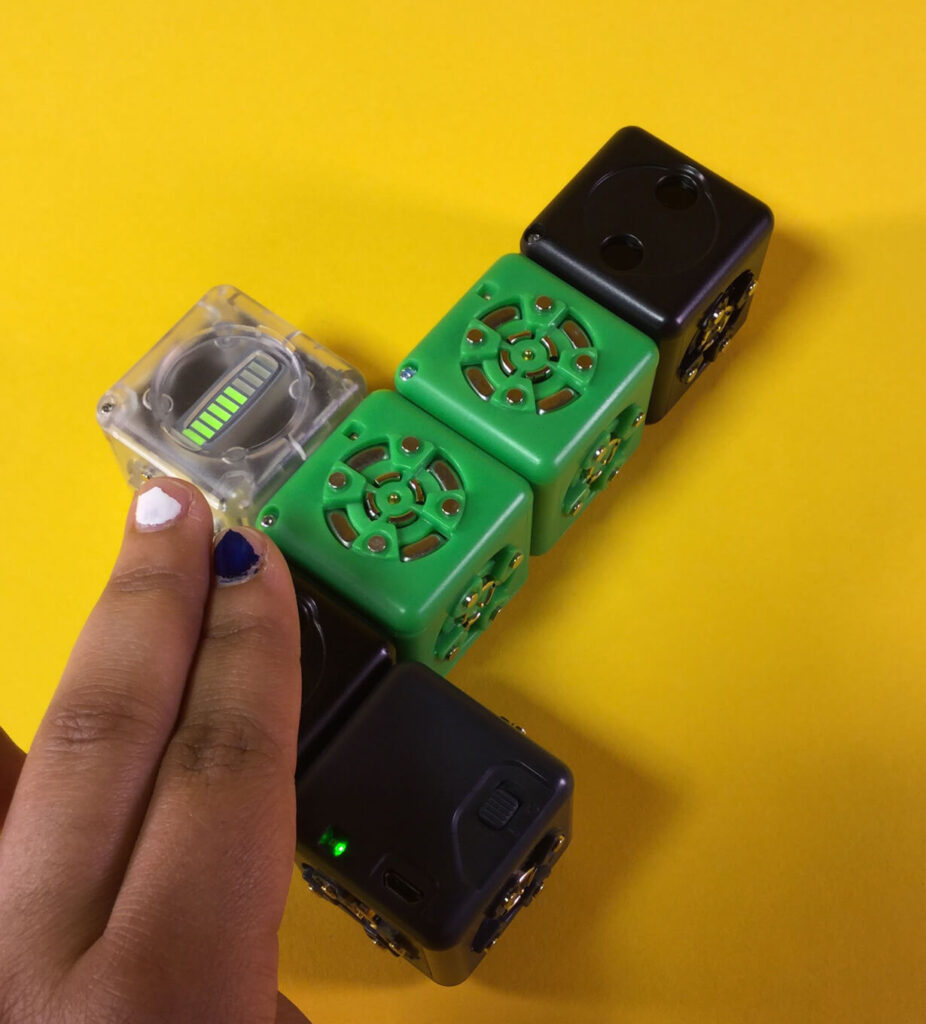 16
Use the Minimum block as a switch.

Suppose you want to make a light-sensitive Gobot—it goes when it sees light. But you also want to be able to turn it off. Of course, you can just switch off the battery, or take out the Battery block. But you can also use Cubelets to make an on-off switch. Here’s how. An ordinary Light-sensitive Gobot just has two blocks: a Brightness Sense block and a Drive Action block (plus a Battery block). The number from the Brightness Sense block tells the Drive Action block how fast to go. A brighter light, a bigger number, a faster go-bot. 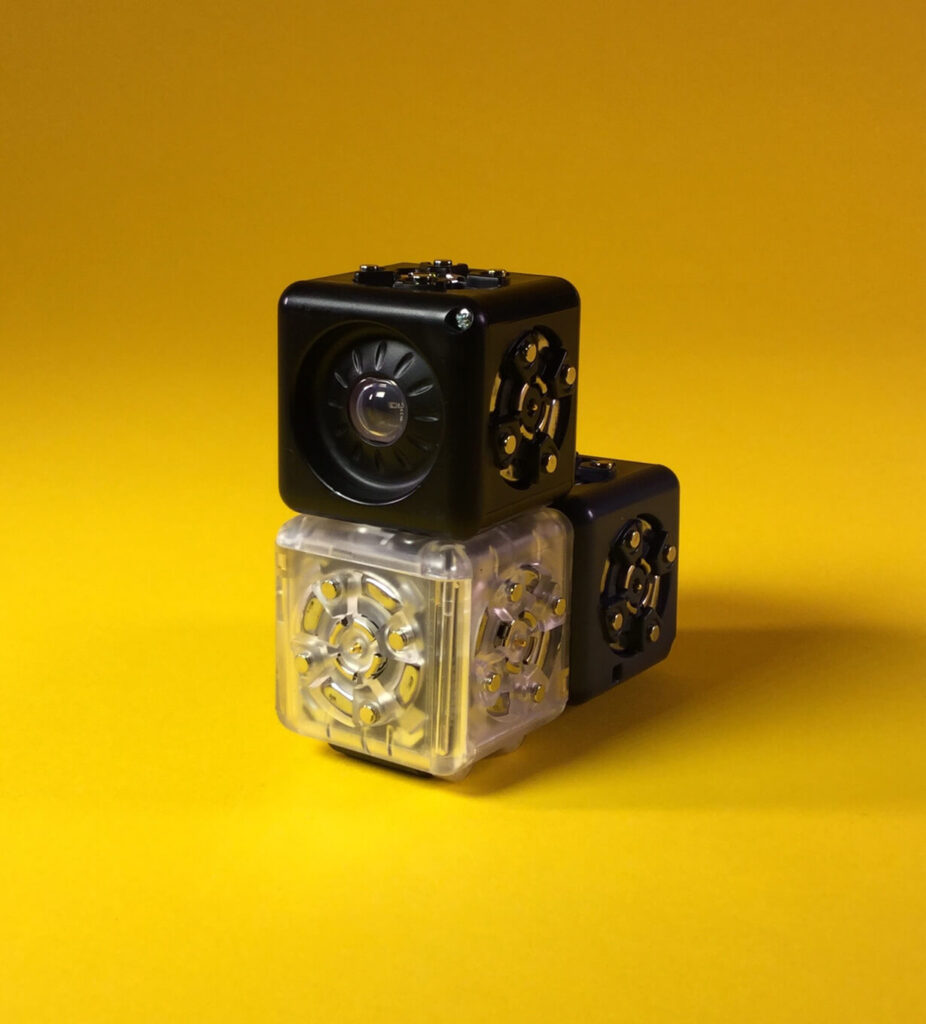 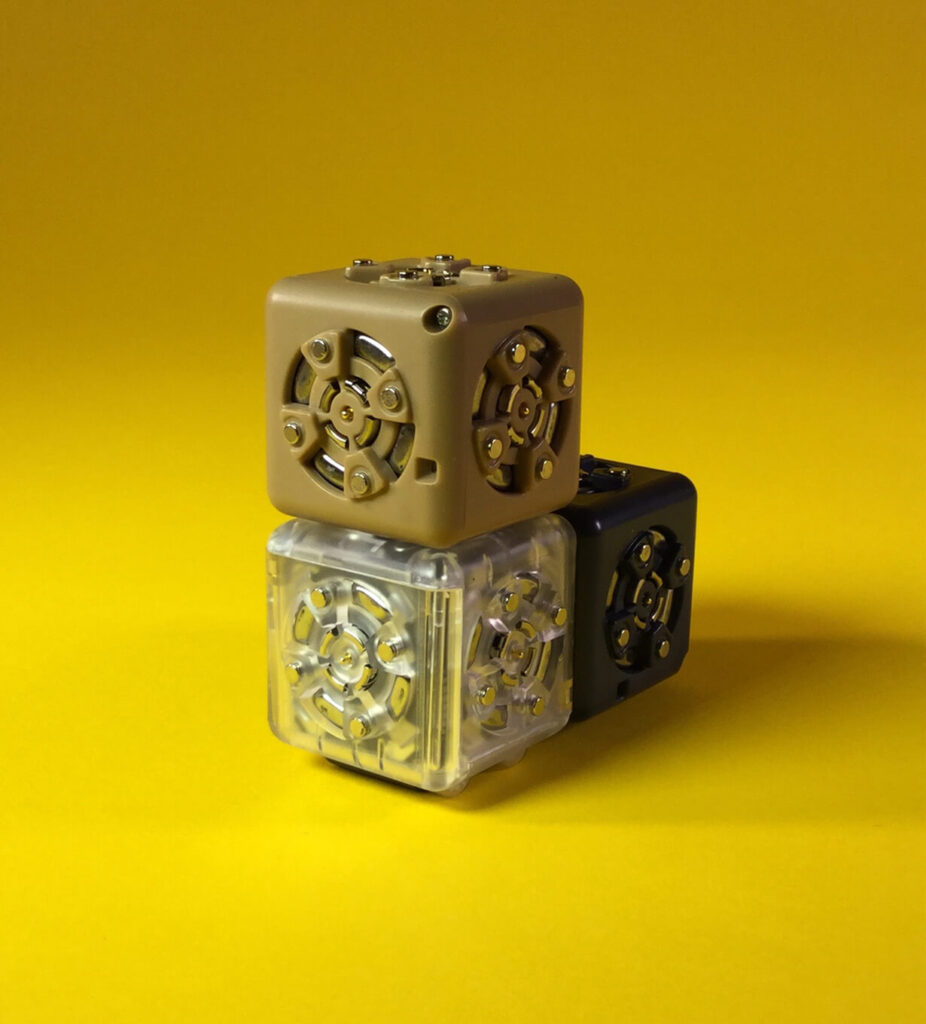 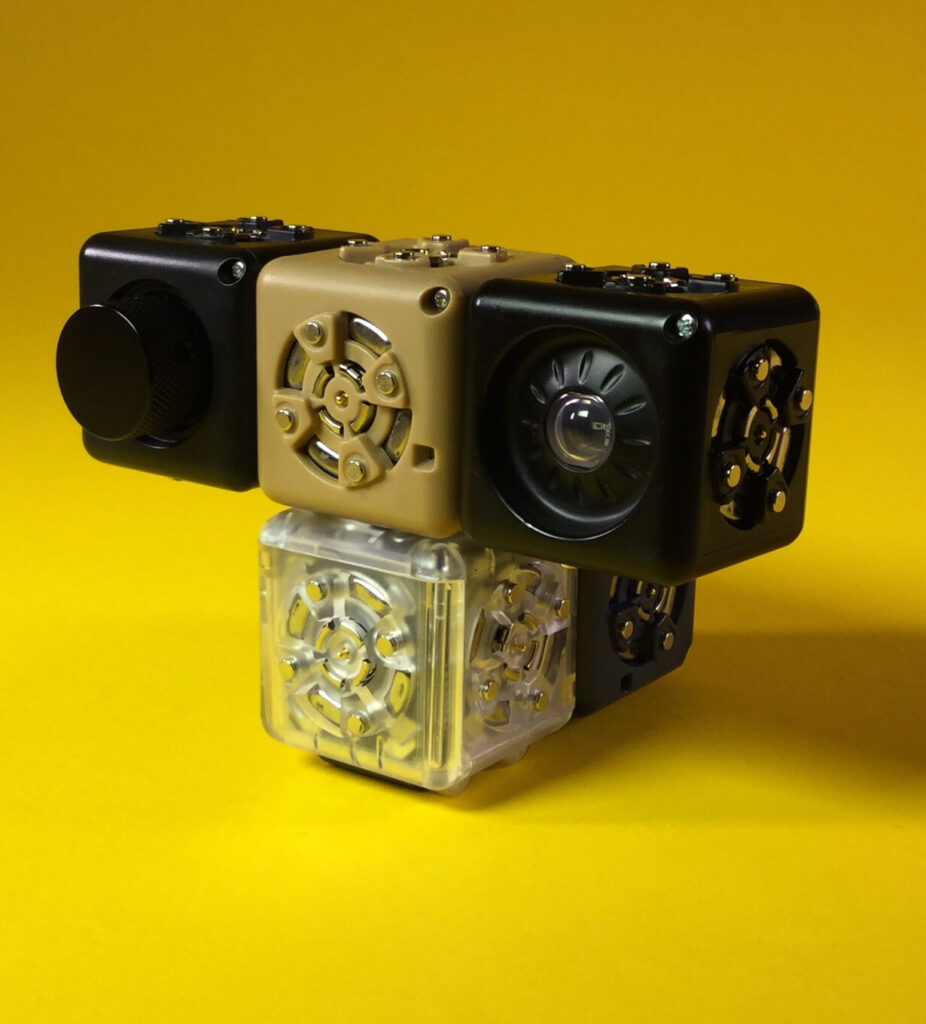 17
Use the Blocker block to separate two parts of a robot.

The dark green Blocker Think block passes power but does not allow numbers to flow through it. Use it to build a robot with two parts that don’t talk to each other. Here’s an example. One half of the robot is a Lighthousebot with a spinning light; the other half is a robot that chirps when it sees the light from the Lighthousebot. The Lighthousebot is Knob Sense block that controls the speed of a Rotate Action block, and on top of that, a Flashlight Action block that points outward (sideways). When you turn the Knob Sense clockwise (to the right), the light goes on and spins. 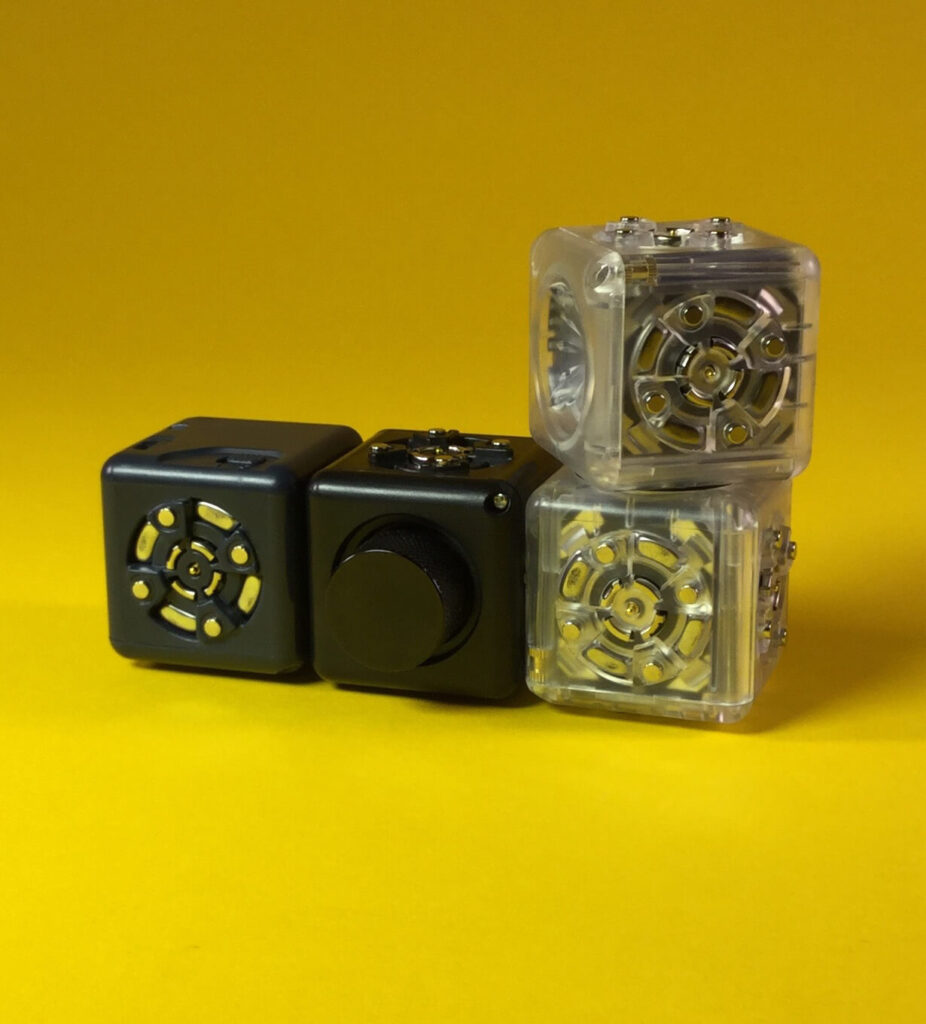 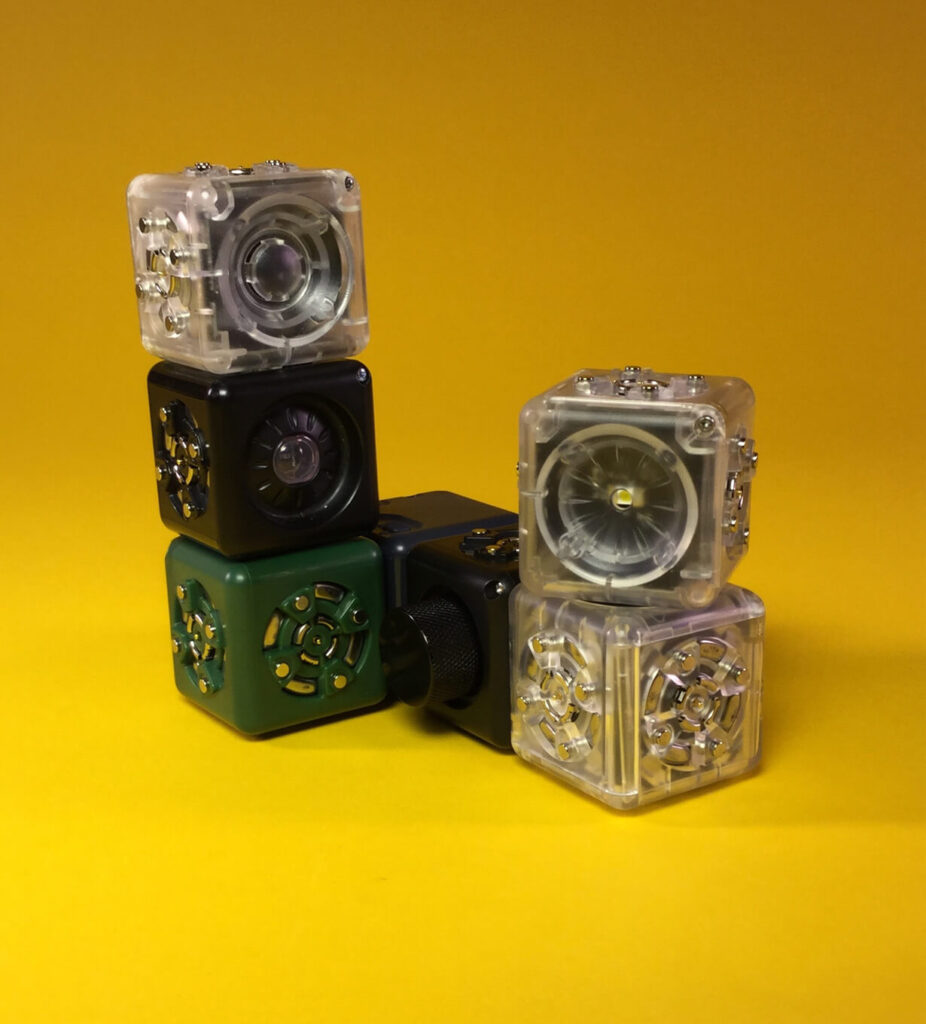 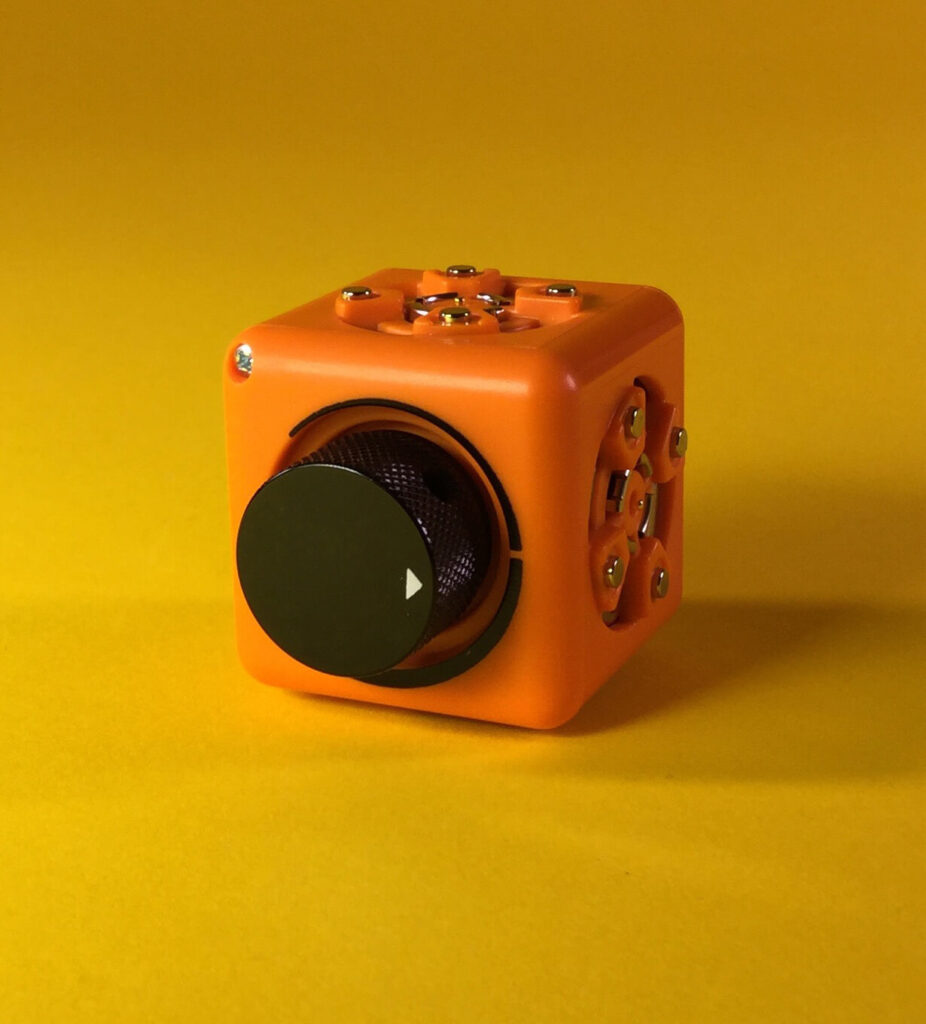 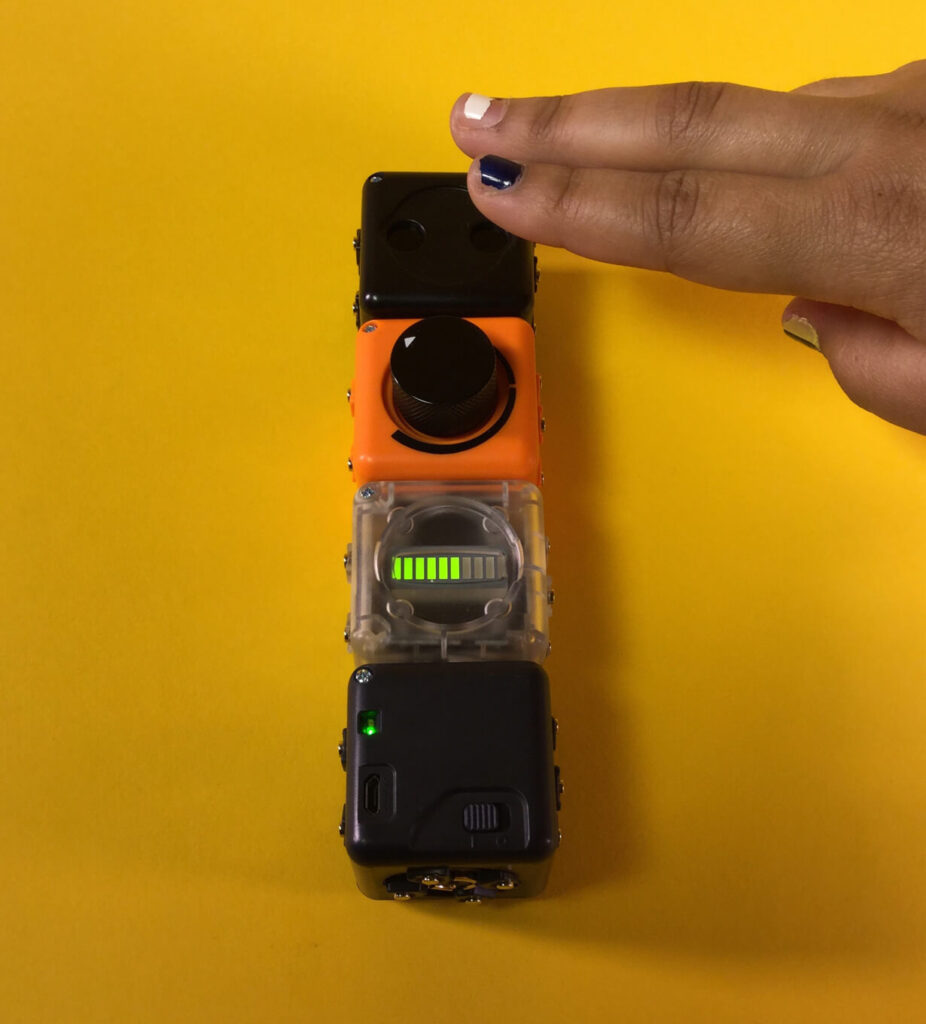 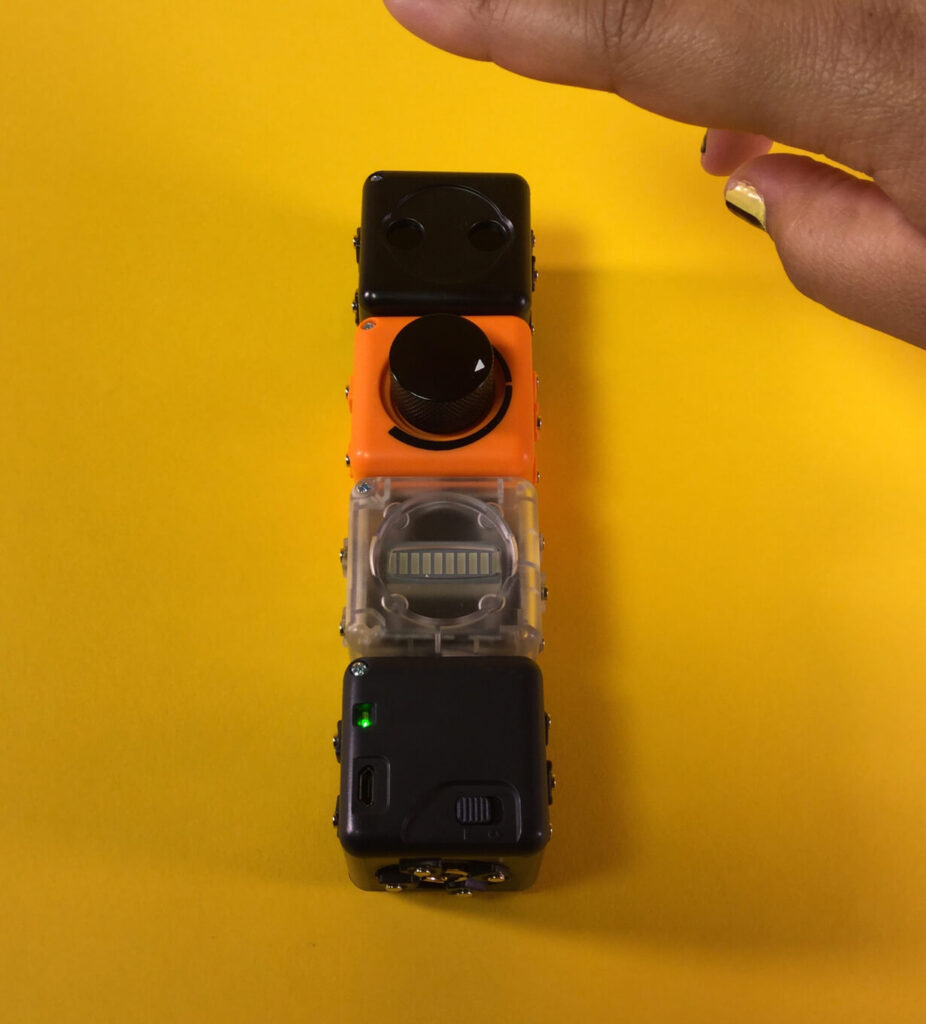 When you’re ready to experiment further, try Cubelets Console. It’s a free web app that helps you visualize the data inside your Cubelets and change their behavior.